Welcome to the Vapor Probe

This website contains the creative practice outputs for my PhD research project, a project which came to be known colloquially on the internet as the Vapor Probe. The name is a portmanteau of Vaporwave, a genre of internet music and aesthetics that is the subject of my study, and cultural probes, a design research method which was central to the development of this project. Initially, my research was conceived of as a reaction to the work of music journalists and scholars who I, as a participant of the community, felt had co-opted Vaporwave by attempting to mythologise rather than understand it on its own terms. In particular, I was struck by how the community seemed conspicuously absent from their own narrative and was inspired to find a way of co-creating stories about Vaporwave with the community, to explore what people’s personal involvement meant to them. 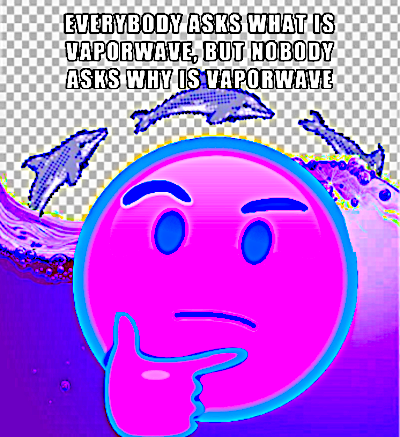 It was important to me that the story we told was not just co-created by community members but that it was told for the community’s benefit. As a member of the community, I had a responsibility to ensure that collaboration was not used extractively to mine insights for the sole benefit of the academy. And so creative practice became central to my project, drawing on practices which were native to Vaporwave as a way of ensuring that our work was accessible and interesting to the broader community.

This attempt at balancing the needs of scholarship and the community began with a card game which invited participants to reflect creatively on their personal experiences of Vaporwave. The results of this game were collected and published as a digital archive which allowed participants to explore the collective body of work which served as the inspiration for musical reflections. The results of this sonic experimentation were released publicly by the label DMT Tapes FL.

Then, to help formulate my own conclusions about this body of work I created a zine using collage art as a means of literally piecing my thinking together. The zine titled Adventures in Vaporwave was published electronically and distributed to project participants for them to share with their own social networks.

All this work is collected here on this site for you to now explore.